By clicking 'CONFIRM' and proceeding with navigation, you declare to be informed that the following material is intended for healthcare professionals

By clicking 'VISITOR' you will be redirected to Novavision Group page 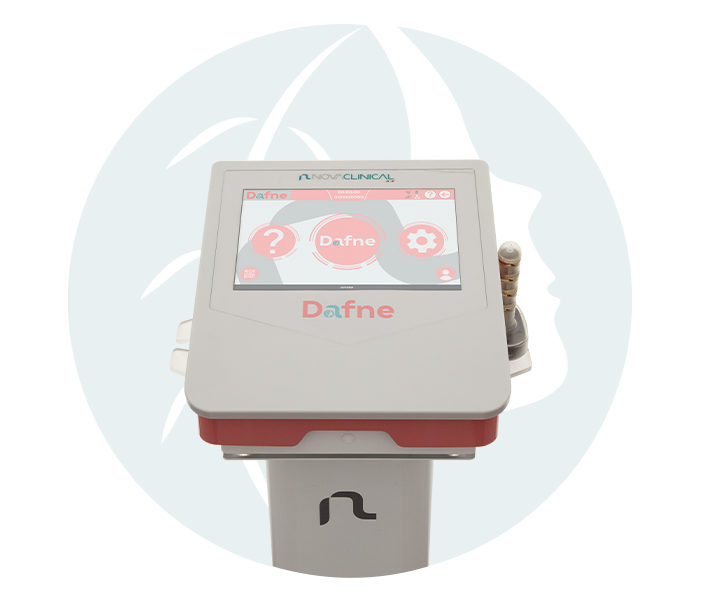 Complementary technology complementare to the most common treatments vulvo- vaginal.

It enhances the body’s natural response to the most common vulvo-vaginal problems.

The athermal energy of photo-biostimulation increases the cells’ metabolic activity, microcurrents enhance collagen production and the healing of post-laser scars, while functional electric stimulation produces reflected mechanisms for the reorganisation of neurophysiological processes.

The simultaneous presence of these three technologies in the same device makes DafneTM a complete device, including for mono-device therapies, by acting actively against infections, and for post-partum and post-surgery rehabilitation therapies.

DafneTM is an all-round device whose various technologies can be easily adapted to different intimate health conditions. Designed and produced in Italian laboratories in the form of a self-standing machine, it is easily used thanks to inbuilt, intuitive software that coordinates the various emissions while respecting the treatments provided by the system. A screened cable connects the body of the machine to the handle – a vaginal probe using LED technology at three different wavelengths (red, infrared, blue) and four gold-plated rings for an all-round action. 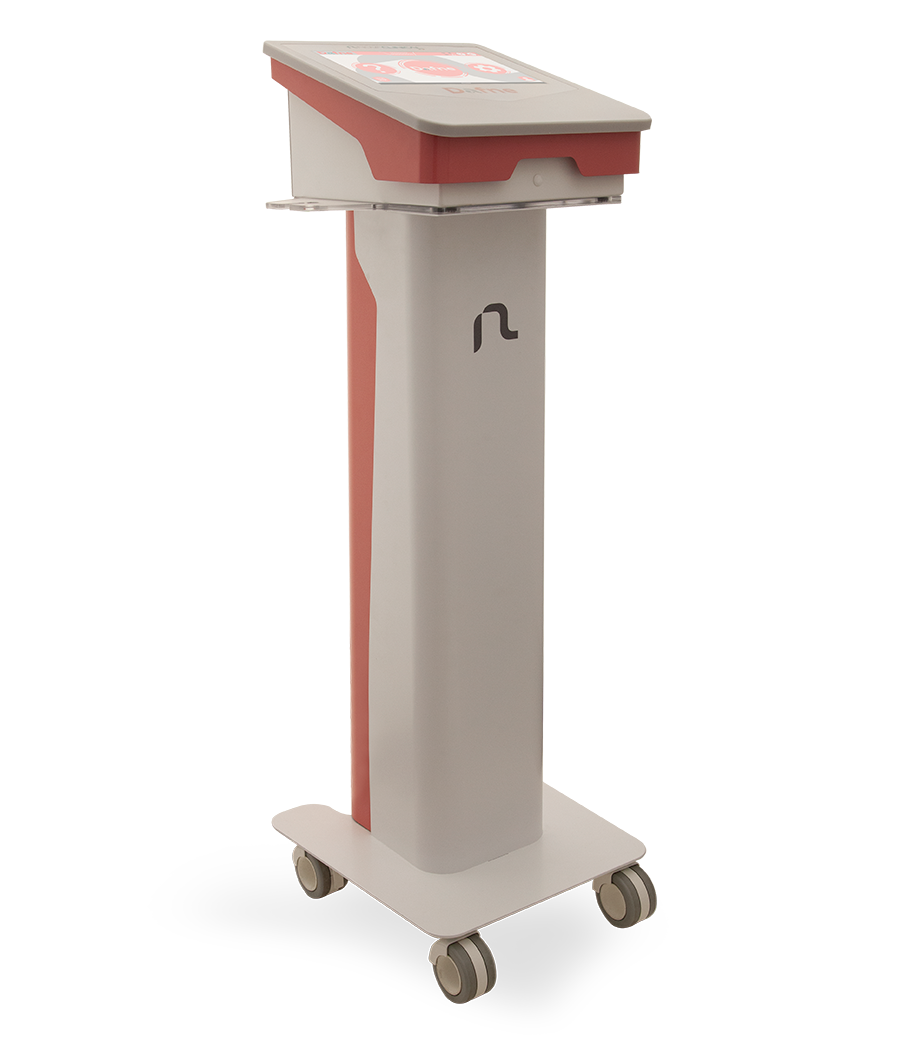 Electrical Stimulation (ES) therapy consists in the use of electric currents for therapeutic use. Depending on the programme selected, specific effects are generated on the tissues, namely on excitable structures (nerves and muscles).

The body perceives a comfortable stimulation due to the interference between two medium-frequency sine wave generators which merge at muscle level and generate the contraction at the desired frequency. Electrostimulation generated in this way is able to forcibly stimulate muscles such as those of the pelvic floor, which would otherwise be difficult to be included. 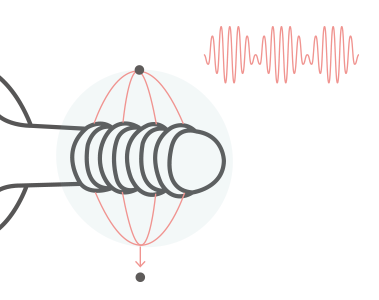 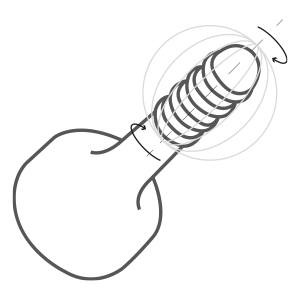 DafneTM also acts on pelvic muscles by means of low-voltage electric impulses aiming at treating painful conditions (tens). This type of current is capable of resetting the nociceptive system responsible for the sensation of pain and of stimulating the production of neuropeptides and neuro-mediators exerting an analgesic action.

DafneTM electrotherapy also uses a non-conventional technology for electric stimulation: microcurrents, or MENS. These are low-intensity currents in the order of micro-amperes, i.e. below the threshold perceived by the patient. The advantages of this technology include tissue generation, also thanks to the ability to stimulate the production of new collagen. 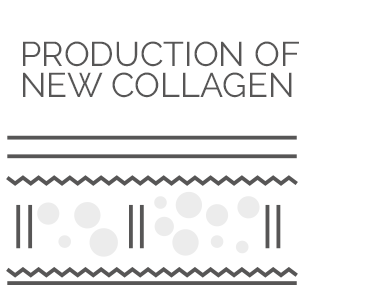 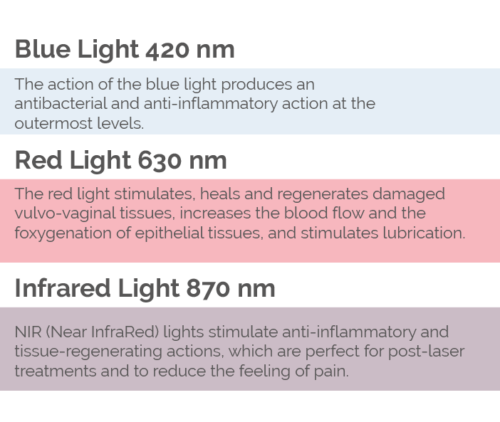 Athermal energy from a light source activates natural biological processes. The energy of the LEDs is received by the body by means of photoreceptors that absorb its photons and give rise to an increase in the cells’ metabolic activity, which starts to produce ATP. Depending on the administered wavelength, different biological effects can be obtained.

The safety of treatments is a priority in all of Novaclinical products, including DafneTM, increasing the comfort levels of the treatments carried out by the operator. The patient is given a bracelet with a Bio-feedback button that enables them to have full control over the emissions of the device, thus playing an active part in the treatment. 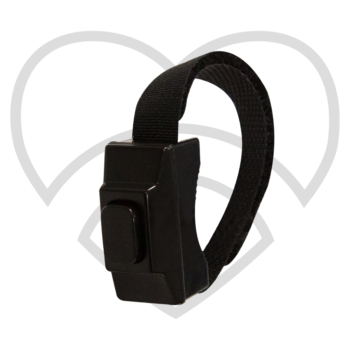 In a rapidly changing and increasingly networked world, Novavision firmly believes in the creation and development of the IoMT concept. With a view to offering you a device that is always up-to-date, DafneTM is set up for continuous upgrades of the Internet of Medical Things.

At the same time, as a result of becoming members of the IoMT community, users can leverage the continuous support of the scientific board, and share experiences with colleagues around the world (customised protocols, special cases, medical history, follow-up data). The professional user can thus offer their patients unique advantages, such as access to procedure logs, wearable devices, advice, suggestions on treatments, and personal reminders.

Why is Dafne™the right solution

DQRF treatments do not involve recovery times, which means no change to one’s daily habits.

Short sessions that can be easily scheduled accommodate both the patient and the operator’s needs and provide immediately perceptible results.

Thanks to painless procedures and with total comfort for the patient, no anaesthesia or cooling systems are required.

Thanks to an electronic bracelet, the user can stop the treatment, taking active part in the session.

DafneTM is a self-standing device, programmed to carry out its treatments in complete autonomy: the doctor will only have to define the patient’s medical history and choose the most suitable treatment among those available.

Novavision provides constantly updated training material, multimedia contents for the proper use of the machines and continuous training with experts in the sector.

Thanks to IoMT technology, each device is directly connected to the parent company, allowing the Novavision team to provide real-time remote support.

The device has been designed to optimise the room available in your study, so it comes in two versions: on wheels and bench-type.

Total Made in Italy

100% made in Italy means Italian design, Italian materials, Italian data sheets and the guarantee of using the highest quality products.

Everything you need – from consumables to spare parts – will be shipped directly from our laboratories, which means immediate and effective support. 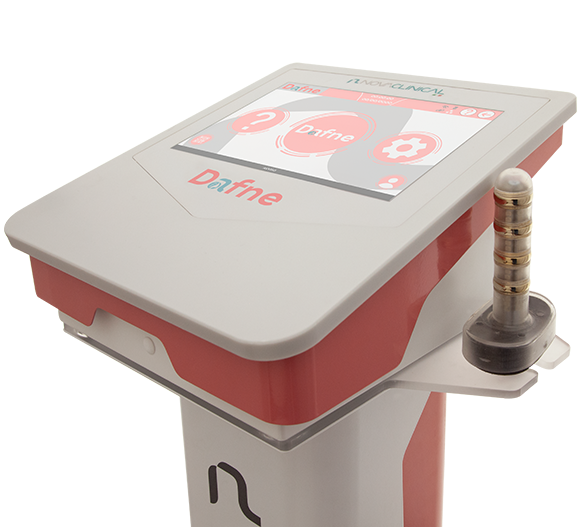 Do you need more info?

Talk with our experts

If you want to book a consulting or a demo, fill in the form and you will be contacted soon